The worldwide Tripawds Traveling Barney Tour may be over, but the limited edition KillBarney TourBook is available documenting the first 30+ visits with Tripawds members around the world. 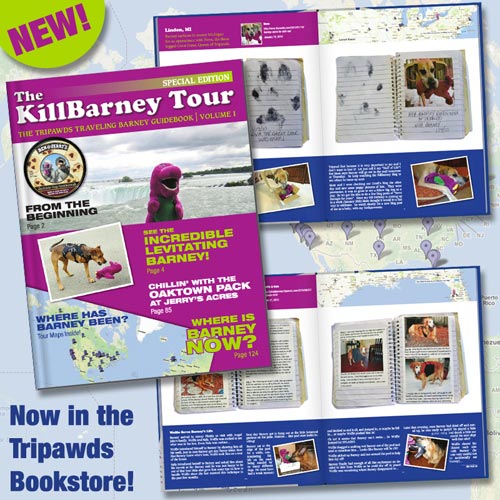 After much deliberation at Tripawds HQ, the KillBarney Tour has been suspended until further notice.

The two Barney Boxes are finally back home, safe with all contents intact. 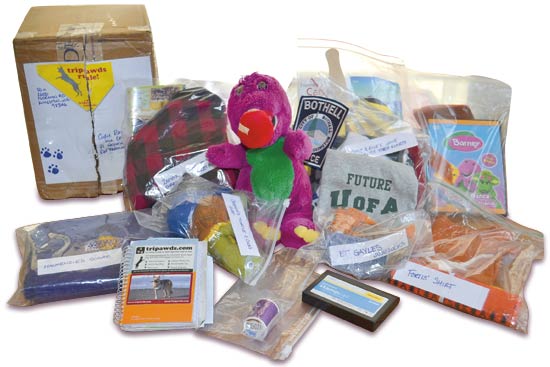 Jerry’s last remaining traveling Barneys will be taking a break from any further world travels for a wile. Having gone missing for more than a year, we cannot risk disappearance of these Tripawds treasures. 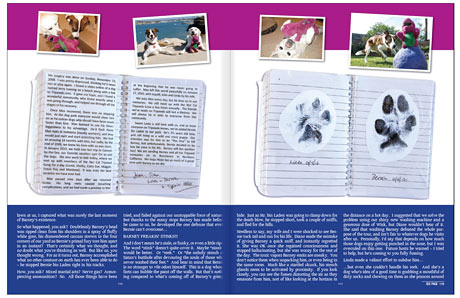 The original journal entries and all mementos are being inventoried, photographed, cataloged and prepared for archival storage.  But don’t worry. You can catch up on the first few dozen legs of the KillBarney Tour with the official KillBarney TourBook!

This 128 page magazine style guidebook features photos, hand-written notes, and blog entries from the first 32 members who hosted the KillBarney Tour, from Caira Sue in January, 2010 to Rizzo in June, 2012.

Preview all pages and order your limited edition copy today in the Tripawds Blurb Bookstore!

What is The KillBarney Tour?

While we wait for news about the next adventures of the KillBarney Tour, Spirit Jerry’s Big Barney just wanted to let followers know that he helped Wyatt recover from his recent gastropexy surgery by commiserating with the conehead while wearing his own cone of shame. 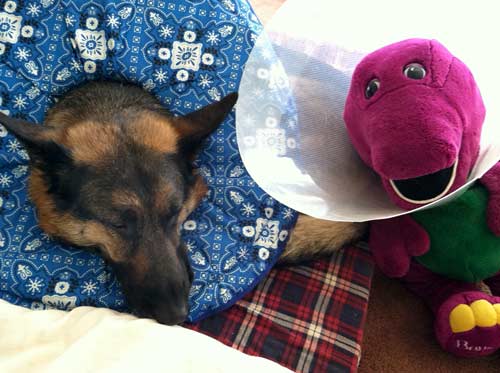 We hope to hear from Barney’s next host soon. In the meantime, be sure to check out the tour map to see where Barney has been or add your name to the list of Tripawds who want to chew on Jerry’s barney.

Better yet, get the KillBarney Tour Vol. I to see more photos and read the original journal entries from the first 30 visits Tripawds members had with the little purple beast! Now available as a special edition guidebook or e-book! 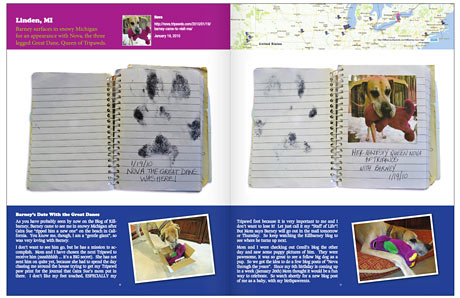 The first edition of The KillBarney Tour Tripawds Traveling Barney Guidebook is now available as a special edition 128 page magazine in the Tripawds Bookstore.

More than three years in the making, The KillBarney Tour, Vol. I is now available in the Tripawds Bookstore!

From Barney’s first visit with Caira Sue in January 201o, to his time with Rizzo in June 2012, this first volume of the Tripawds Traveling Barney Guidebook reproduces the original KillBarney Tour journal in its entirety along with photos and blog entries from members describing the fun they had with their dogs while hosting Jerry’s little purple friend.

Follow the adventures of the smelly beast as he visits Tripawds members and their dogs all around the globe, spreading cheer and making trouble along the way.

From California to Maine, Florida, Alaska, England and back – and many points in between – this 128 page special edition magazine style guidebook includes maps and links to members’ blogs for more details about each stop on the Killbarney Tour.

As of the publication date for this first KillBarney Tour Guidebook, the Tripawds Traveling Barney had visited the homes of 44 Tripawds members all around the world. This book documents the first 32 visits. 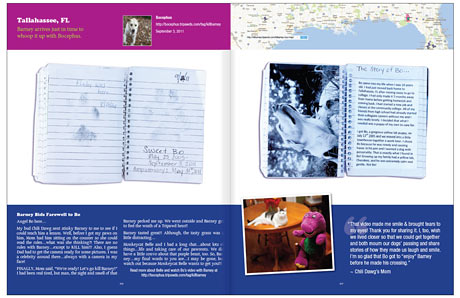 Be prepared to laugh and cry as you read the hand-written notes from Tripawds members who have had some play time with Barney and their pups. Barney visited a number of dogs just in time to say goodbye, while many others showed him a good time – making videos and taking photos at local attractions.

Learn about Barney’s  visit with the Queen and his poop patrol duties with Gayle. Read about his his spa day with Abby and his narrow escape from the hurt locker. From lazy days with tri-pug Maggie to final days with Alexander the Great Dane, dogs of all sizes have left their smells on Barney and put their paw prints in this book. 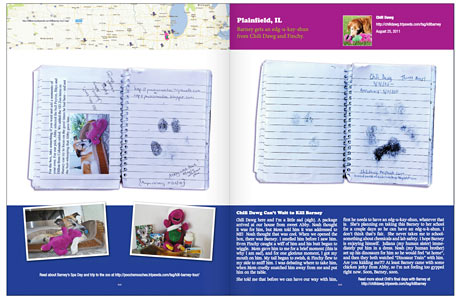 Once the original trip journal published in these pages had filled up with notes from all of Barney’s previous hosts, Rizzo sent the box back to Jerry’s pack. The Tripawds team then made two copies of the book, split up all the mementos, and sent two Barneys back out on the road.

Get Your KillBarney Tour Guidebook Here!

Tour stops following August, 2012 will just have to wait and be documented in a future edition of KillBarney Tour Guidebook. In the meantime, you can follow along with Barney’s adventures here, and check out the map to see where Barney has been or post in the I Want Barney forum to add your name to list of possible future tour hosts.

Visit the Store page of this blog for details and pricing of all KillBarney Tour books. Purchase the printed guidebook or download the e-book and start reading in minutes! Find links to get your own plush Barney toy for your three legged friend, and stay tuned for future editions of The KillBarney Tour books.

Wyatt tries to shoot Barney out of a Civil War canon at the Bloody Angle battlefield in Fredericksburg, VA.

While we wait for word from Domestic Barney, Wyatt wanted to share how he tried to shoot his little purple friend from a Civil War canon at the Fredericksburg Courthouse battlefield while playing tourist during the Greyhounds Rock conference. 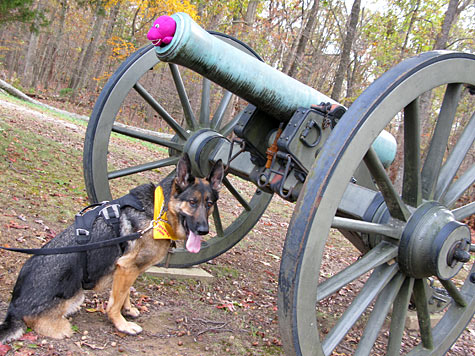 The KillBarney Tour is officially all dressed up and ready to go everywhere!

When we started the KillBarney Tour, we had no idea that it would become so popular and would touch the lives of so many Tripawds and their people. Over two years later, Barney and his giant suitcase have traveled throughout North America and even over to England.

You can see he’s already traveled far and wide, but we thought it would be great if even more Tripawds members around the globe could become a part of the KillBarney Tour experience. 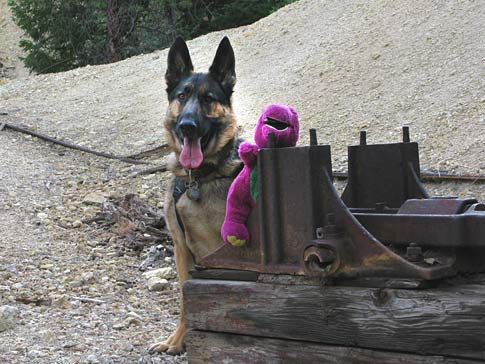 When Barney returned to Tripawds headquarters for a visit with Spokesdawg Wyatt Ray, he convinced Jerry’s pack to send off his smaller, singing cousin, “Travelin’ Barney.” We are hoppy to announce that now there are two of Spirit Jerry’s favorite Barney dolls traveling around the world, terrorizing Tripawds everywhere! 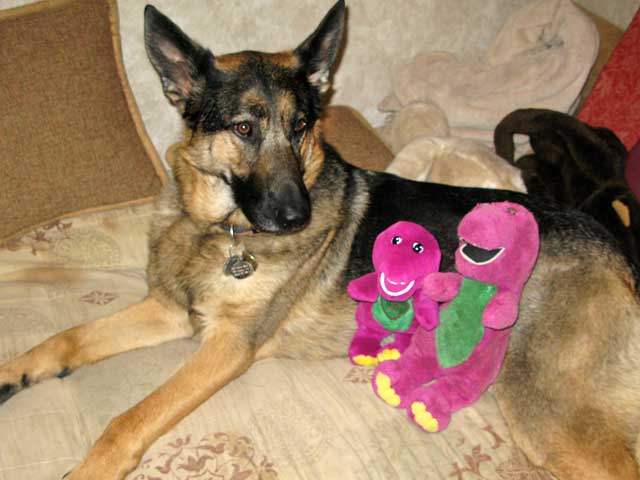 This Barney might be smaller in stature than the original, but he is also  covered in Jerry slobber too, and is perfectly suited for overseas travel. In his suitcase, we have packed 1/2 of all the goodies that previous hosts have added to the tour. Travelin’ Barney wants to visit foreign friends, like Tripawds UK members, so we made sure his suitcase is light enough to keep him affordably globetrotting to places outside North America. 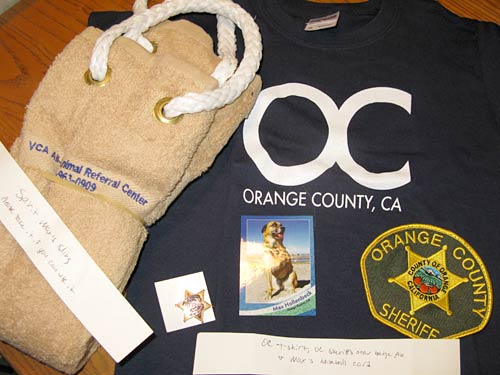 In addition to having Barney’s cousin join the tour, we also made two copies of the original KillBarney Tour journal – featuring the notes of all those Tripawds Barney has visited. We’ve also included a new Tripawds Journal in each box so future tour hosts can add their own experience to “The Barney Chronicles, Volume II.”

Both Barneys are now on the way to their next stops on the KillBarney Tour, all dressed up in their Bret Michaels Pets Rock dresses and ready to pawty! 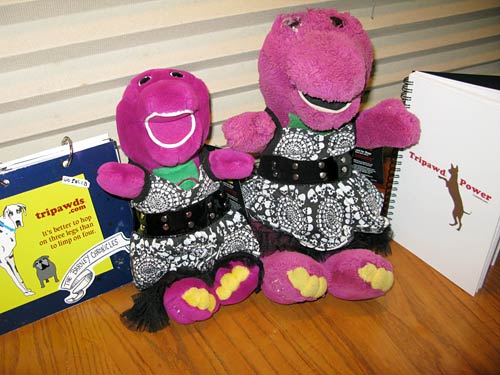 If you want to host either Barney, here are the rules. If you want Barney to pay a visit, post your request here in the Forums. Be sure to indicate where you are located and keep in mind these important notes:

We hope everyone will get to host these special little guys at some point. Reading about other folks’ Tripawds adventures is a warm-fuzzy experience not to be missed, and including your own Tripawds’ Barney adventures adds to the heartfelt journal that brings hoppy tears to the eyes of so many in this community.

And now, without further adieu, we bid the Barneys farewell again and look forward to following their adventures with three legged dogs around the world. Stay tuned to hear find out which Tripawds members will hosting Barney next!