Meanwhile, back at the ranch…

After several harrowing cross-country trips and long, lonely periods of isolation, Barney hitched himself up to a wagon train and headed out to Lake City, Colorado to spend some time at Spirit Jerry’s favorite dude ranch, where Tripawds Spokespup Wyatt Ray is currently employed as a ranch dawg. 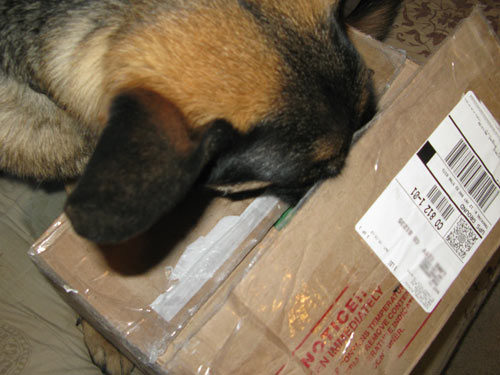 Wyatt wasn’t expecting a guest. But the box sure smelled good, so he dove right in! Suddenly, a stinky purple beast pops out and shouts, “Hello! I love you!” 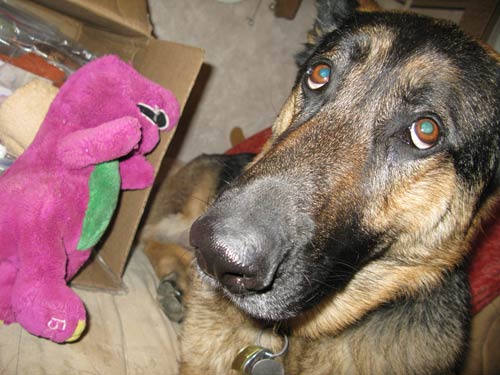 “Really? Are you kidding me? He’s back?” said Wyatt.

Oh not again. “You really aren’t cut out for ranch life,” he told this raggedy traveler, “but I can show you the ropes, maybe make something out of your sorry butt.” 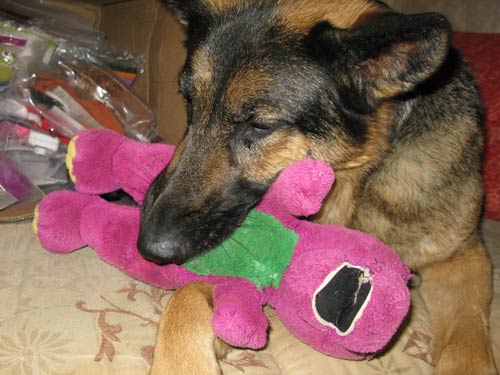 Wyatt quickly showed Barney to his bunk, and stuffed his big nose down into the box. Suddenly, a scent arose from the depths, a scent that brought back memories of good times, and his favorite bitch, Codie Rae from the Oaktown Pack. 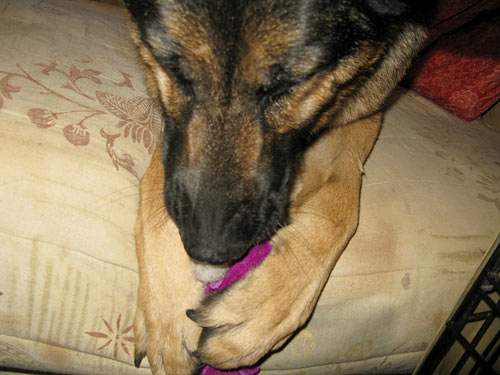 Back when the Oaktown Pack hosted the little beast, his fake cousin Floyd tried to steal the show. Codie’s gang did their best to decapitate the poseur, but they failed in their attempt. Now, what was left of Floyd was hiding in the box.

But he couldn’t escape the powerful nose of Wyatt Ray.  “Hey, it’s that creepy wanna-be Barney!” He could smell the Oaktown Pack’s drool all over his tattered remains.

So he dug in, and continued to shred his remnants to pieces, as Barney watched from the dark corner of the bunkhouse, and shuddered . . . .

Stay tuned for more adventures with Barney at Wyatt on the ranch before he hits the road again soon!

Be sure to post in the I Want Barney forum if you understand the meaning of this tour an want your Tripawd to host the KillBarney Tour!