Tripawds member carmenmcconnell just informed us that Barney made it to Edmonton, Canada! Be sure to check out Catie’s blog soon for complete details. 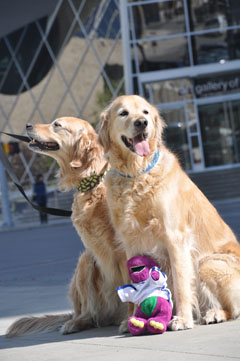 Barney’s been hiding out in Canada with Catie and Riley. It took him a while to make the journey from Colorado to Edmonton. We’re thinking it had to do with Canada customs officials who are known (if not exactly admired) for their officiousness, especially when it comes to purple plush dinosaurs crossing the border.

Catie and Riley were shy and skeptical at first. But Barney won them over with his purple charisma and they couldn’t kill him after all. 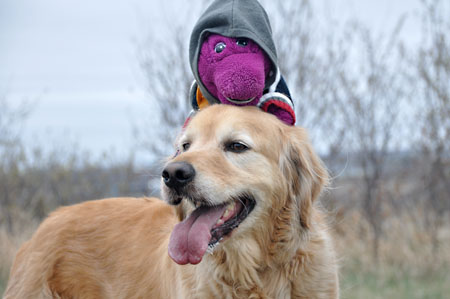 He had trips to the dog park. He had heart-to-hearts and lie-downs with Catie and chews from Riley and caught some sunshine on the back deck. We had to keep an eye on Riley though – he’s an over-exurberant de-stuffer of stuffed animals. Barney hung out in a cedar tree and even made off with Riley’s ball, which Riley didn’t find amusing at all. It’s the one thing simply Riley does not share.

We did a downtown tour with him, visited our civic and provincial buildings, Edmonton’s new art gallery (no one would let us through the doors though), an urban park, and had a number of lazy days and evenings at home while Catie was recuperating from her last chemo treatment.

We hope Barney had a good time. He was well-slobbered and licked and chewed and Riley at one point even stripped him the sweater he arrived in. We’re happy he came for a visit. We’re sad that he has to go but we know he has a mandate to meet many other eager Tripawds.